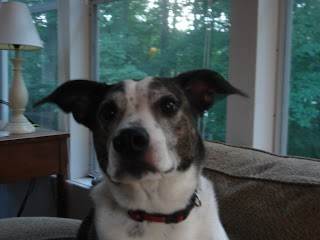 Scooter the Wonder Dog is a connosieur of squirrels. He sniffs their trails, observes and reports their presence with loud joy, and demonstrates a variety of track and capture techniques ... so far in vain.

He's also the Forrest Gump of dogs. Stupid is as stupid does.

The guys were in the sunroom this morning, enjoying breakfast and Dick Williams' Sunday morning news show. Suddenly, a squirrel appeared on the railing just outside the window. "Scooter! Squirrel!"

Scooter ran to the sunroom, having heard "food" instead of "squirrel." He sat at attention, staring at their plates.

"No, Scooter. Squirrel!" They pointed. His focus on their plates never wavered.

"Mom! There's a squirrel outside and Scooter can't see it."

So, wanting to give the dog an opportunity to bark insanely, I picked up Scooter, turned him to face the blasted squirrel, and said, "Squirrel!"

He looked lovingly up at my face.

I put him down, he ran toward the window outside which the now laughing squirrel perched, did a quick 180, and returned to his post facing the guys and their plates. At this point, the squirrel fell off the railing, in hysterics and eager to post Scooter's embarrassing lack of canine instinct on Squirrel-tube.

Lesson: your dog may be madly, passionately, over the top obsessed with squirrels.

But food always comes first.
Posted by knitternall at 8:44 AM