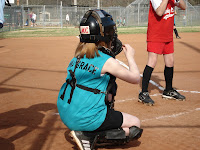 AG's softball team is in the playoffs and they've advanced to the championship game tonight. This 8U team is fun to watch - a bunch of cute girls with flyaway hair, big grins, and knobby knees all bouncing Tigger-like around the field makes for an enjoyable season. The parents have been sympatico as well - no overachiever parents screaming at their daughters to SWING! CATCH IT! AW, COME ON! We've enjoyed our daughters and valued their time on the field and in the dugout. Thanks, Coach McKnight!

(We watched the 12U championship game before we played. Way more serious. Much less about having fun and more about the rules of the game. Lots of loud debates between parents and officials. AG isn't sure that's going to be a good thing when she moves up next year. I'm not, either, but then I'm not that competitive about sports. If, however, there was a playoff among knitters, I'd likely be the one contesting any call against my particular method of long-tail cast-on or the option of ripping out what I just bungled. So I guess I should just live and let live with those very heated folks on the sidelines!)

Tonight is also AG's "graduation" from 5th Grade at Austin Elementary School. (It's the Knitternall family's 9th year at Austin - as she moves on to Peachtree Charter Middle School, I'm leaving Austin with happy memories and gratitude.) She'll march with her classmates in the Dunwoody United Methodist Church Fellowship Hall, deliver the closing address, then run with me to the car for a quick change en route to Murphy Candler Park. The guys will follow as soon as T drops off A at home to continue studying for tomorrow's Geography and Latin finals at DHS.

It's a big night in the Knitternall family.
Posted by knitternall at 8:02 AM