Thank you for an amazing, wonderful, lifechanging Odyssey adventure. 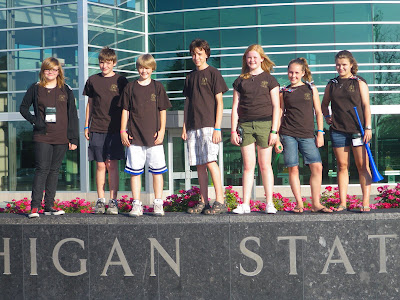 
From the moment the Dunwoody Homeowners Association's Odyssey of the Mind Middle School Team took second place at the State competition and discovered they had qualified for the World Finals, life took an abrupt and magical left turn. 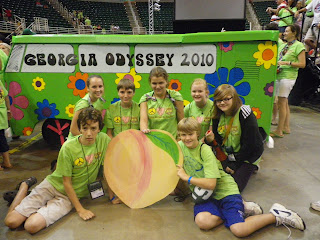 We left for the Odyssey of the Mind World Finals at Michigan State University on Wednesday, May 26 and fell happily into a Looking Glass populated by 6,000 left-turn thinkers and that number again of coaches, chaperones, organizers, and other volunteers. Splendid silliness and happy camaraderie were the rule at Odyssey of the Mind World Finals. NASA was there, encouraging the next generation of out-of-this-world problem-solvers to consider a universe of possibilities in their futures. There were opening and closing ceremonies with an Olympic-style parade of nations; a Creativity Festival that challenged kids even further with fun-filled problems; teams from Russia, Poland, Singapore, China, Mexico, and more; and a never-ending cavalcade of teams with costumes and props made from cardboard boxes, duct tape, pvc pipe, bubble wrap, aluminum foil, and lots and lots of materials found curbside and at the local dump. 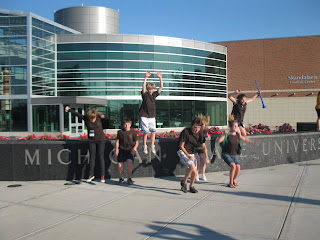 There were 63 teams competing in Discovered Treasures Division II; the team's final scores placed them in the top third of their peers, a very satisfying result for their first time "at bat."

By Sunday, as we boarded planes homeward bound, laden with souvenir pins (which gave the security folks fits) and proudly wearing World Finals team shirts, the kids knew they had just made some powerful lifelong memories.

Now we're back in the "real world," with lessons of outside-the-box problem solving and friendly competition now ingrained in each of the team members.

For this experience and opportunity, we say to the generous people and organizations who made the trip possible: thank you.

Odyssey of the Mind
is an international educational program that provides creative problem-solving opportunities for students from kindergarten through college. Team members apply their creativity to solve problems that range from building mechanical devices to presenting their own interpretation of literary classics. They then bring their solutions to competition on the local, state, and World level. Thousands of teams from throughout the U.S. and from about 25 other countries participate in the program.  Currently, a documentary is airing on PBS featuring Odyssey of the Mind -- "ReCreating America: Creativity and Learning."

Posted by knitternall at 8:50 PM