Congratulations. You're Going to Michigan!

The Dunwoody Homeowners Association-sponsored Odyssey of the Mind Middle School team took 2nd place in their division at the State Competition, so are heading to World trials!

We are proud, exhilerated, exhausted, thrilled, stunned - that whole host of emotions parents feel when their kids do something amazing all by themselves. 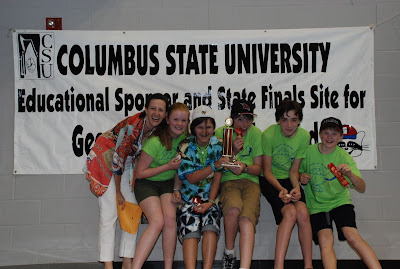 Congratulations to coach Karen Bass, who was recognized by the Georgia Odyssey of the Mind program for special achievement. Congratulations to Anna Grace Nall, Jennifer Kiser, Max Noto, Will Bass, and Jack Jarrell, (not pictured, teammates Kendall Lowrey and Sofia Gonzalo) for a stellar performance in the long term and spontaneous problems.

The team headed to Easter Island, then segued to the London Eye through imaginative scripting, songs, props, and some rather hilarious acting.

Now, on to Michigan:

Students from around the world will compete in the 31st Odyssey of the Mind World Finals. This competition emphasizes creativity and teamwork. It has grown into such a huge event because OotM makes learning fun while giving kids the chance to explore their imaginations and express their creativity.

Millions of kids have been working hard all year perfecting their solutions to OotM problems and competing within their regions and states in order to advance to the 2010 World Finals. However, only the best of the best will make it to WF.