High School Girl has a game she plays with her friends when they're so bored that board games are the only stopgap in the long, bleak moments stretching between activities in their go-go-go summer. It's called "Would You Rather" and it poses two equally terrible options that the player must choose and offer reasons why.


WOULD YOU RATHER have five bottles stuck on the fingers of one hand for a year -OR- a bucket stuck on your foot for a year? "Neither" is not an option here! 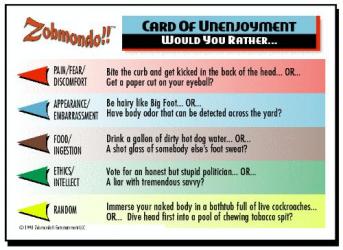 The fascinating part of this game for a parent is hearing their reasons, which are ultimately based on value systems they're only vaguely aware they are developing.

Adults live in WOULD YOU RATHER land every day. We have to make difficult choices, resorting to the "lesser of two evils" without always being fully aware of the consequences. We're given misinformation, insufficient information, and downright incorrect information, and must formulate intelligent decisions based on factors out of our control.

Do I take that high-paying job with all its risks and unknowns when my present job, while boring and stressful, is at least stable?  Will my kid thrive in the new neighborhood and schools when we chose them based on a realtor's recommendation and a few Google searches?  Should I invest in the higher cost health plan with its lower deductibles and extensive coverage or the low cost plan that assumes my family will stay healthy?

I have a few suggestions for the game:

WOULD YOU RATHER go into bankruptcy-inducing debt to pay for your kid's college OR take a great job you love that has no healthcare benefits?

WOULD YOU RATHER be sentenced to watch Nancy Grace 24 hours a day for a year OR to go back to Middle School for three years?

WOULD YOU RATHER have 1,000+ friends on Facebook OR a few really good, lifelong friends?

WOULD YOU RATHER own a large flat screen TV with no cable service OR a clunky old TV with free, extended cable service?

Despite the game's rules, sometimes the real-world answer is both. Or neither.