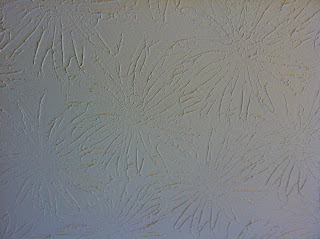 What were they thinking?

Our home was built in the early 1970's, in a somewhat straightforward Williamsburg/Federal four-over-four-and-a-center-door style with lots of dark paneling, dentil moulding, slate floor entry, and shaggy carpet. We know that because it was still in that condition when we bought it ten+ years ago. We've done quite a bit of updating, but one thing remains ... the stippled ceilings. The sheetrock crews evidently loved stipples, swacking a mop-like gadget up against the ceilings, creating this floral-like textured effect.

Better than popcorn ceilings. But not nearly as nice as SMOOTH ceilings.

We had a leak in an upstairs bathroom, which flowed through to the kitchen ceiling. The plumber had to cut a hole in the ceiling to fix the problem. Which lead to another necessary repair, to the sheetrock.
Not so simple. Oh, the sheetrock and mud were pretty straightforward. The challenge? The blasted stippled ceiling.  We got estimates from a series of handy-people who said, with great honesty, they weren't sure they could match the stipple, but would try.

Our handy-dandy contractor is hard at work right now, cutting sheetrock, screwing it into place, mudding the seams, and preparing his hand-made stipple tool.

Keeping my fingers crossed that the results will look somewhat seamless. So to speak.
Posted by knitternall at 10:48 AM